We had an Azure Automation Runbook that was called at the end of the Flow anyway, so I decided to use that to set the Label on the SPO Library using SharePoint Online PnP’s Set-PnPLabel. No problem. However, it takes a while for the Label to be applied to the Library and as email was sent to users at the end of the Flow, they found themselves in the library too early, i.e., the Label was not yet set.

I could’ve used  a “Do Until” loop in Flow and poll the list but that’s not something we like to do, right? We like events and triggers, so why not use the HTTP Webhook action, sounds exciting! 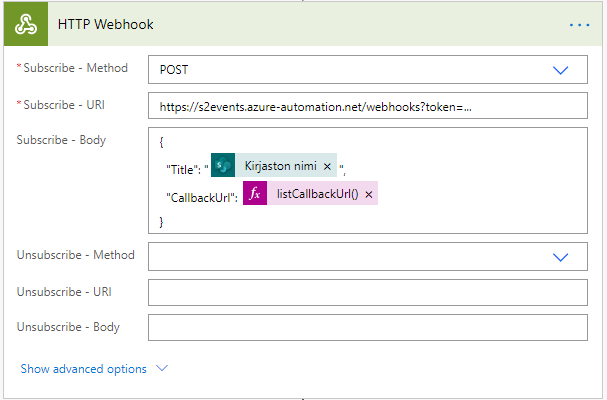 In the screenshot above, I’m calling the Azure Automation Runbook, but you can really call anything that is capable of listening to your request and at the and making a HTTP request back to the callback URL you define. You define your endpoint address in the Subscribe - URI field.

Here I’m also passing in the title of the SharePoint Library as I’m also doing some tricks on the library but you would pass in anything you need in your scenario.

In the backend code you will do whatever you need, but when you’re done, make HTTP POST call to the URL you received as a parameter in your backend code, in my case that would look like this in PowerShell.